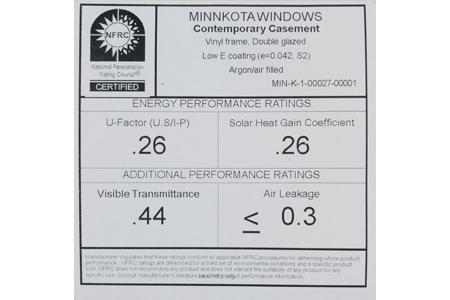 The table below illustrates the NFRC data for Minnkota Windows and Doors.  The following terms are used in NFRC data and are defined as follows:

U-Factor: Rate of heat loss.  The lower the U-Factor, the greater a window's resistance to heat flow and the better its insulating properties.

SHGC (Solar Heat Gain Coefficient): The fraction of incident solar radiation admitted through a window.  It's expressed as a number between 0 and 1.  The lower the SHGC, the less solar heat it transmits.

VT (Visible Transmittance): An optical property that indicates the fraction of visible light transmitted through the window.  The lower the number, the greater amount of "tint" appearing in the glass.

AI (Air Infiltration): The unintentional, or accidental, introduction of outside air into a building, typically through cracks in the building envelope and through use of doors for passage.  Also known as air leakage.  Number given is a measurement of cubic feet per minute by square feet.